As many of you know, leadership development is a thing I use frequently in my position at Michigan State and in my field and in many of my volunteer roles. So I sit in theories and models all the time.

Over the last few months I’ve been on a journey of reflecting on my style, approach and work in leadership. I’ve come to work with a wide variety of styles especially over the last couple of years here at MSU. Some I have meshed with well and others have been challenging for me to work with.

However, over the past year I was faced with a style I had never experienced. It was challenging and actually involved some breakdowns and tears. It’s taken a lot of conversations, many hours of reflecting and doing tons of research, but I’ve been able to come to a better understanding of some of these conflicting styles. It’s helped me to better approach leadership and I have also learned about a theory of leadership development I was not aware of, which is what I write about today.

To start,  of course I’m familiar with the Adaptive, Transformative, Transactional, Strengths-Based and Servant Leadership Theories and Models. If you’re familiar with leadership development these are nothing new. However, in my research to better understand a former administrator’s leadership style, I learned about the Leader-Member Exchange (LMX) ‘Theory to add to my arsenal of leadership theories.

Before we go any further, you may have noticed I use ‘theory’ vs theory. For me I do this as there is debate whether it is a theory. I personally am understanding it more as a model; that it was created in response to and as a representation of reality. But that’s probably more interpretation and semantics.

But now, back to the ‘theory’.

The concept of LMX ‘Theory’ is grounded in a leadership style that creates both an in-group and out-group and the respective membership of each group is based on perceived similarities within professional and personal contexts by the leader. These similarities can include age, gender, personality, credentials, experiences, hobbies, etc. An individual’s membership to a group may also be decided based on the perceived competency at performing their job.

Depending on which group you have been placed into in the psyche of the leader, it will determine access to opportunities. In-group members often receive raises and promotions, opportunities to join/lead committees and project teams, access to professional development and resources, allowed more autonomy in decision making and having a voice at decision making tables. Out-group members receive little to no development, few opportunities for raises or advancement and have almost no voice at the table.

The mindset in this approach is infusing resources and capital into those whom the leader has identified as key leadership personnel; who in their lens have value in order to maintain consistency and longevity of the organization.

As you can imagine, retention is vastly different between the two groups; with retention being high for the in-group and extremely low for the out-group.

There’s also a third group. This group of individuals the leader has not decided whether they are in-group or out-group. So they will be tested by the leader for them to be evaluated with the outcome that they eventually be placed in a group, depending on the results of the test/opportunity.

In true Brian fashion, I am a more visual individual, so let me share with you how I envisioned a break down of the LMX Theory: 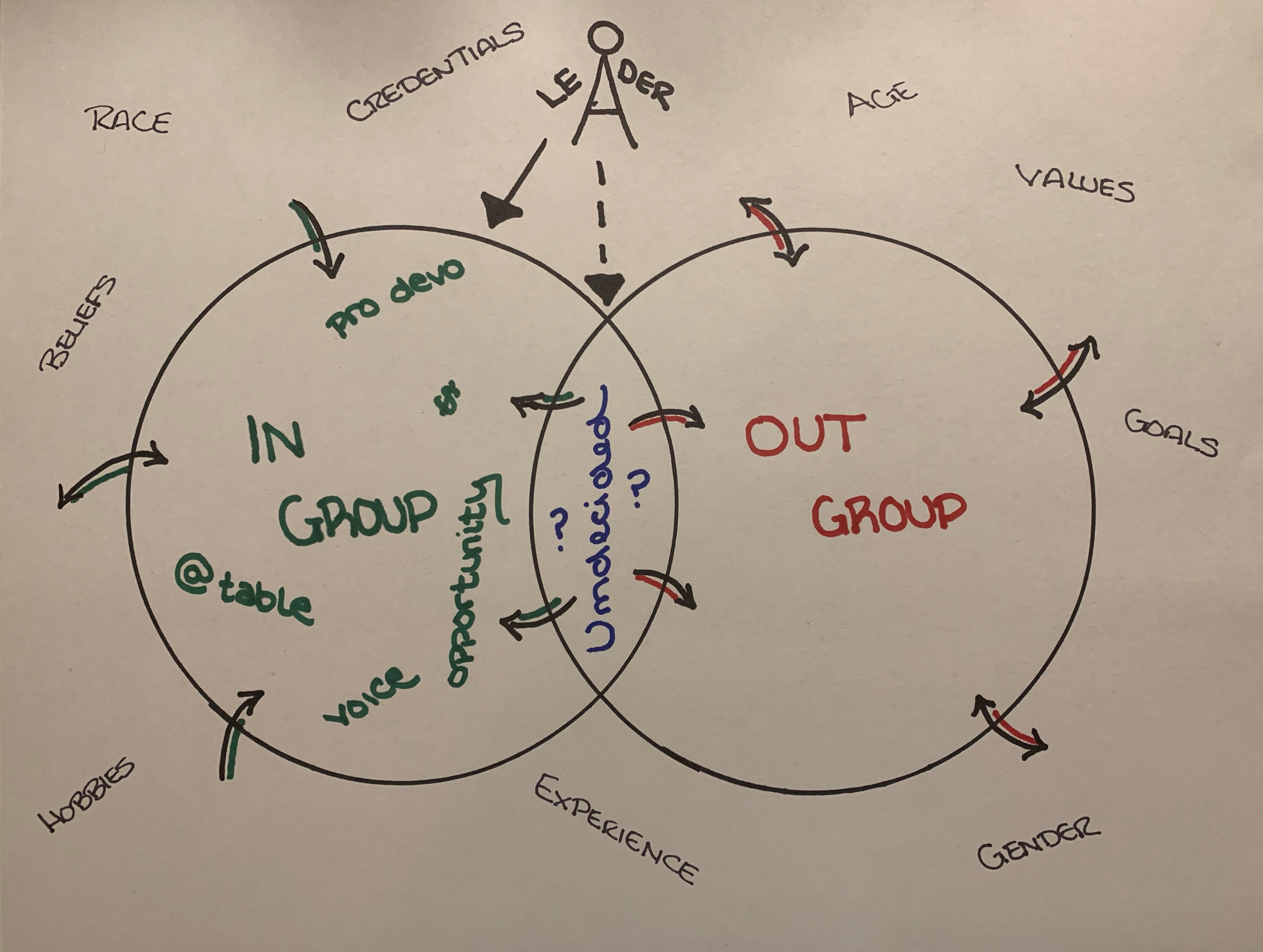 Reflecting on the leaders and administrators I’ve had in my life, and my beginning to learn this model has really helped me in several ways.

I’m actually quite excited to have come across this new ‘theory’ (well, new for me). Now working with student organizations and more leadership programs, this is a new foundational block to help me build out even more intentional programs, and strengthen my own personal advising.

Additionally, it’s just nice to know that I’m not in bizarre-land, in a boat, with no oar. LOL

Thanks for reading my initial thoughts on this new theory I’m muddling through!

I am currently the Assistant Director of Student Life for Registered Student Organizations and Late-Night Programming at Michigan State University. After earning my B.A. from the University of Michigan-Flint, I entered the Student Affairs profession. After a few years in the field, I returned to school and earned my M.A. in Educational Leadership-Higher Education Student Affairs from Eastern Michigan University. In my spare time I blog about my thoughts and musings on current issues in higher education, student affairs, digital worlds, identity development and general life inspirations and observations. I also volunteer a lot for my fraternity and multiple regional and national professional associations. View more posts

One thought on “LMX Theory and Me”